The Government has announced a new forestry funding programme worth €1.3 billion for Ireland that will run from 2023 to 2030.

Under the new fund, payments to farmers or landowners to plant trees will rise by between 46% and 66%, and the payment period will be extended from 15 years to 20 years.

Minister of State with responsibility for Forestry Pippa Hackett said that planting trees is one of the most effective methods of tackling climate change and her aim is to re-engage farmers with afforestation.

The new programme aims to deliver more diverse forest and not just conifers on marginal land. The guiding principle is ‘the right trees in the right places for the right reasons with the right management’. This will serve to meet a range of economic, social and environmental objectives. Broadleaf trees generally have greater benefits for biodiversity than conifers; to that end, all planting covered by the scheme must include a minimum of 15% broadleaves.

Broadleaves and mixed plantations planted under previous afforestation schemes are coming into their own: ‘We’re not farmers, but we planted a forest in 1995. which would not have been possible without grant aid from the Government. Over the years the trees have grown well and the land has become a haven for biodiversity. These days it’s also providing us with a modest but sustainable income stream thanks to regular thinnings (harvesting of individually selected trees) . It’s managed under Continuous Cover Forestry principles so disruption to the ecosystem is minimised’.  – Anna & Brian Browne, Forest Owners. Under the plan, a farmer planting one hectare of native forest would be entitled to grants of €28,000 tax free, spread over 20 years. A new one-hectare native tree area scheme will also make it easier for landowners who wish to plant small areas of trees on their farm.

Why have we fallen out of love with trees?

In 2020, despite a relatively large improvement over the preceding 100 years, Ireland still had one of the lowest percentages of forestry cover in Europe, at just 11%. This makes us the second lowest of 27 EU countries in terms of tree cover, with only The Netherlands lower than us. In total, 39% of Europe is covered with trees.

Of the total forest area in Ireland, 391,357 ha or 50.8% is in public ownership, mainly Coillte. Ireland’s total forest estate is comprised of 71% conifers and 29% broadleaves and nearly  three-quarters of the stocked forest area is less than 30 years of age. Forestry is too often seen as a low yield activity that is only fit for marginal land. 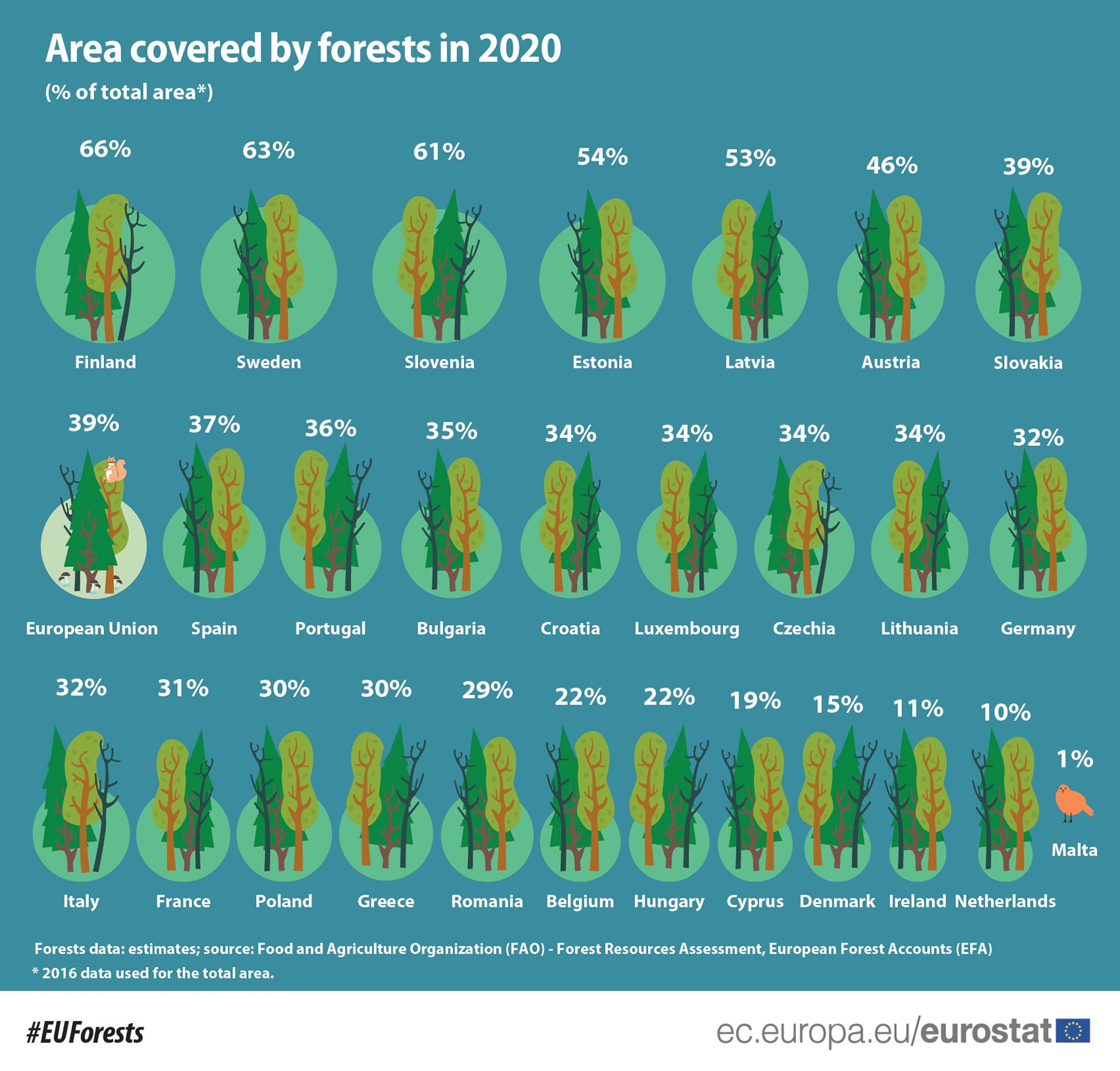 Trees and the Ancient Irish

But this was very different in the past. Analysis of pollen from peat bogs in Ireland illustrates the establishment of forests that once covered 80% of the country thousands of years ago. And trees were crucially important to the lives of our ancestors, cropping up again and again in our folklore.

For example, each letter of the Ogham alphabet, which is the earliest form of writing in Ancient Ireland, is associated with a tree that begins with the sound of that letter. The 20 letters of the Ogham alphabet were each associated with the following trees: alder, ash, birch, hazel, oak, Scots pine, willow, yew, apple, aspen, blackthorn, bramble, broom, elder, furze, hawthorn, heather, holly, ivy and rowan (source: John McLoughlin).

In Celtic lore, Oak trees embodied truth, courage, and wisdom. The Oak tree is also featured in the Celtic Tree of Life symbol. Irish Ash trees were cherished for their strength and healing power, and Hawthorn trees were believed to be representative of love and protection. (source: www.irishtrees.ie)

Some of these associations still resonate today, with many people being very reluctant to uproot a Hawthorn tree for fear of upsetting the Fairies.

Trees are also embedded in our placenames. Of the 60,000+ townlands in Ireland it is estimated that at least 13,000 or 20% are named after trees of collections of trees (e.g. groves).

In Westmeath, places like Cullion (holly tree), Durrow (oak tree), Ballykeeran (road of the rowan trees), Finnea (the wood of the ford), Kinnegad (head of the ford of withes or willows) all derive from trees that grew in the area.

Why we need trees

Today, we need to turn again to trees to help us in the battle against climate change and biodiversity loss. Trees are literally the lungs of our planet and we cannot live without them. Trees not only absorb carbon dioxide and convert it to oxygen but they also store carbon. They also reduce the amount of storm water runoff, helping to reduce erosion and pollution of our water courses and helping to reduce flooding. Trees are also habitats for so many animals, birds and insects. Bats depend in particular on continuous rows and bunches of trees along which to forage for insects.

Sustainable management of forests including regular thinning, agroforestry and incorporating some short rotation forestry can also help with our energy needs. It is possible to replace peat and coal directly in some of our power plants with sustainable sourced biomass from forestry operations.

There is no doubt that trees have a big part to play in the battle against climate change and biodiversity loss and if we’re to win that battle we must plant more trees. The Government’s new forestry funding programme is a step in the right direction.

If you’re interested in finding out more about the new Afforestation Schemes, go to: https://www.gov.ie/en/publication/e384e-forestry-grants-and-schemes/ or talk to your Teagasc Advisor.